A bit, well, ordinary, a non-anniversary Tuka… NOT! We had quite a extraordinary year I have to say. We had to look for a new location unexpectedly because our regular location had torn down our party room. And no Tuka without a party (or two!). Thank goodness we found a very good replacement about half an hour south at De Buitenjan.

At De Buitenjan, a former monastery, we once again welcomed the crème de la crème of teachers. Babara Bangoura had enjoyed himself so much that he wanted to come over again. Ousmane, Ibou, Paulus, Eef and John fortunately also managed to find their way to the Dutch city of lights. And we had a newcomer! Paul Nas, wellknown for his WAP pages joined us to teach balafon classes. A first at Tuka and it was great!

We had a really international group of visitors; people came from the Netherlands, Belgium, Ireland and even Hong Kong. Special as well was the teachers’ performance at the refugee centre next door. Unfortunately, we can’t share the bulk of the photos that were made for privacy reasons. But it was heartwarming…

Alright, ‘nuf said. No words but photos, so here it is: our family album for the year 2016. If you have more photos and films that we can use on this page, please send them on. 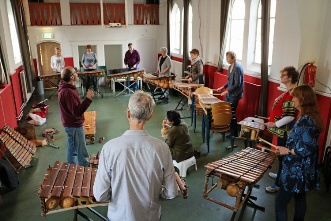