Abdoulaye ‘Oké’ Sène was born into a Griot family in Senegal. He was raised in the Medina quarter of Dakar. Oké is a born performer on djembe and sabar, who’s famous for his mind bogglingly fast solos. He was already part of “Deco Afrique” and “Les Ballets Africains de Sangomar” at the age of ten. Only four years later, he taught classes and workshops to tourists.

In 1988 Oké Sène became a member of the troupe of master drummer Doudou N’Diaye Rose, Senegal’s most famous sabar drummer. Oké went on tour with the band to the United States, Europe and Japan several times. During this period he also taught percussion classes in Paris, Tokyo and several cities in the States.

In 1991 Oké moved to the Netherlands and settled down in The Hague. At the moment he gives regular percussion classes in The Hague, Delft, Leiden. He’s regularly asked to teach workshops and classes in countries like Spain, France and Germany.

One can certainly call Oké Sène a musical chameleon. Next to djembe and sabar he is a master at playing the doundoun, sico, bugerabu and seourouba. Hij is name giver and bandleader of the celebrated band Sène Percu. His knowledge of traditional rhythms, creativity, pedagogical techniques and perfectionism combined make him one of the best percussion teachers of Europe. 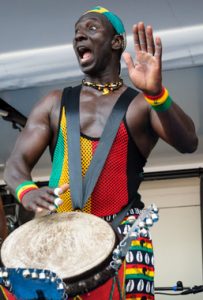